In a Sun-Scorched Land, Part 2

From AIOWiki
Jump to navigation Jump to search
#863: “In a Sun-Scorched Land, Part 2” 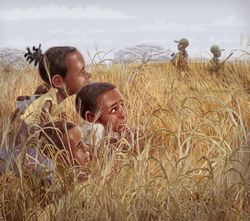 4For everything that was written in the past was written to teach us, so that through endurance and the encouragement of the Scriptures we might have hope.
Songs Included
[[{{{song}}}]]
Inventions Used
[[{{{invention}}}]]
Featured Charity
Focus on the Family Africa
Short Used
[[{{{short}}}]]
Spanish Name
{{{spanish_name}}}
Spanish Airdate
Error: Invalid time.
Soundtrack length
2:30
Previous title
“In Search of the Promised Land, Part 2”
Host
Chris Anthony
Written by
Kathy Buchanan
Directed by
Kathy Buchanan
Produced by
Nathan Hoobler
Executive Producer
Dave Arnold
Post-Production by
Christopher Diehl
Production Assistant
[[{{{production_assistant}}}]]
Engineered by
Christopher Diehl
Music by
Jared DePasquale
Songs by
Unknown
Other websites

The children's faith and courage are tested as they struggle to survive and reach the refugee camp.