From AIOWiki
Jump to navigation Jump to search
Crnel 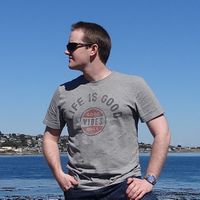 An Odyssey fan actively listening from 1992 through the Novacom Saga in 2002, I've returned to listening to episodes again and am enjoying contributing to the Wiki.

I'm a Northwest native and continued resident, and was fortunate to have attended a live encore performance of #365: “Clara” by Paul Herlinger, Walker Edmiston and Dick Beals at a radio convention at the Seattle Center in the spring of 2006.

Currently working in the tech industry as a data support analyst, I list computers, technology, maintaining and streaming my personal Plex server (which includes Odyssey episodes) and exhibiting a singularly unique brand of epic nerdiness among my personal interests.

As an amateur voice actor who spent years making short films via vintage program Microsoft 3D Movie Maker, I have a good ear for voice acting and incidental music and enjoy identifying actors in bit roles in each episode. I've also been known to do spot-on impressions of Rodney Rathbone and Harlow Doyle.

More to be added later

The Show by Era

The first era of the series (1987-1996) is the one I consider the best, particularly the 1992 Season through the 1996 Season which I consider to be the "Golden Years." This "Chuck Bolte" period is my continued favorite due to both the overall quality of the production and the originality, the latter being partially due to several creative hurdles the writers had to overcome — creating a fledgling program, responding to primary actor Hal Smith's sudden passing, etc. The production output of the series was also at its highest during this period, with more episodes produced annually than in later seasons due to the lack of an extended break in the summer — something that makes the quality of this period even more impressive.

The following era (1997-2008) is very good — Novacom arguably being the series peak — though I don't find it as fresh and creative as the first decade. The infamous "split-era" period also mars an otherwise strong decade.

The third and modern era (2009-Present) I do not like at all for a host of reasons, some related to acting (Andre Stojka still being the Whit I can't accept) but most to writing (Wooton, what have they done to you?).

For listening order, I've found the episodes best listened to chronologically order rather than by album. This presents the episodes in their original production order and offers a more intuitive listening experience.