The Case of the Broken Lamp 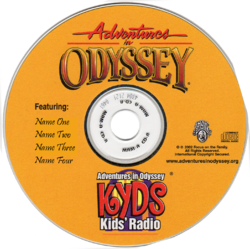 The Case of the Broken Lamp is an episode that was able be recorded at Whit's End in Colorado Springs until 2018, when it was replaced by another script.

Mr. Whittaker has found his his "Mr. Happy Clown" lamp broken on the floor in his office, and Detective Connie Kendall must find out who broke it.

Connie stands in Whit's office and finds Whit's Happy Clown Desk lamp, broken. Mr. Whittaker and Connie conclude that the only people that have been in Whit's office recently are Jamie and Casey. According to Casey, he/she went into Whit's office with his/her friend, Jamie, to sharpen his/her pencil. He/she did as such and Jamie was riding the mechanical horse in the office. After a while, they left with nothing harmed. Whit then is sure of who broke the lamp; the culprit is, both Jamie and Casey. The vibrating from both the pencil sharpener and horse, moved the lamp to the edge of the desk. When the door slammed, it fell off, and broke.