Mabel is Whit's talking computer in his secret computer room behind the bookcase in Whit's office. When first seen, Whit had used Mabel to hook up all of the exhibits and the electricity to monitor all of exhibits to monitor the kids' preferences.

It's possible that Mabel is an early A.I. (artificial intelligence) program.

The location of the secret computer room: 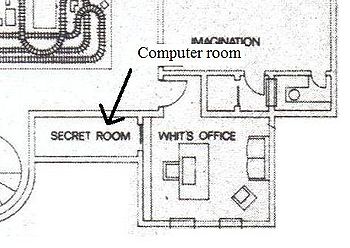 (If you want the full floor plans for Whit's End, click here.)

In #73: “A Bite of Applesauce”, (when Mabel is introduced for the first time) Connie Kendall "accidentally" loads a computer program called Applesauce.

Mabel has appeared in 9 episodes, has been voiced by 4 actors, and has received an average user rating of 92%.
Retrieved from "https://www.aiowiki.com/w/index.php?title=Mabel&oldid=277151"
Categories:
Hidden categories: