From AIOWiki
Jump to navigation Jump to search
Lauren Schaffel 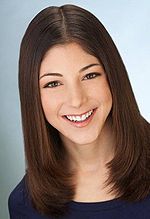 Lauren Schaffel is the voice of Liz Horton. She has acted in TV shows, done voice-overs for TV shows, and is an HDR artist for movies. Lauren Schaffel has been singing, dancing and acting since the age of five and made her television debut as the kindergarten girlfriend of "Fudge" in the Saturday morning series of that name. Lauren is most recently known for her recurring role as Becca, the cute but trouble-making best friend of Renee Olstead on "Still Standing." Also, Lauren is known as the girl who auditioned and won the leading role in the pilot for the Bravo reality show, "Situation Comedy" produced by Sean Hayes. Besides acting in sitcoms, Lauren studies improvisation with the Groundlings and is also a student of classical voice. She recently placed as a semi-finalist in classical voice in The Spotlight Awards, a competition for young talent held at the Los Angeles Music Center. Lauren continued her studies of theater and music at Columbia University and the Julliard School. In May of 2010, Lauren graduated from Columbia University with a degree in English. While attending Columbia, Lauren appeared in productions of "The Little Prince" as the prince and "A New Brain" as Nurse Nancy. She now lives in New York City and is pursuing a career in the theater. Lauren was born on June 2, 1988.