From AIOWiki
Jump to navigation Jump to search
Karen Crosby 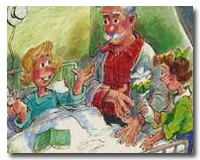 Karen Crosby died at a tragically young age due to cancer. She was strong in her faith until the end. Despite her illness she kept her sense of humor and enthusiasm even knowing she was going to die. She was close friends with Donna Barclay. Before she died she asked Donna to take care of her cat Ferguson. While she had cancer, her leg was amputated. She had chestnut hair.

Karen was only featured in one episode, although she was briefly mentioned in a few of Paul McCusker's Adventures in Odyssey books, such as A Carnival Of Secrets.