From AIOWiki
Jump to navigation Jump to search
Davey Holcomb 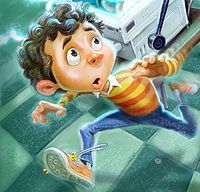 This article is about an inventor. For other uses, see Davey (disambiguation)

David Holcomb is a minor child character on Adventures in Odyssey, who played a a major role in the first episode of the series, #1: “Whit's Flop”.

Davey is first introduced in #1: “Whit's Flop”. After a bad game with the Coyotes baseball team, Davey becomes discouraged, blaming himself for the turnout of the game. Whit tries to lift Davey's spirits by encouraging him to help him with a new invention. Davey decides to create a pizza oven from an old photocopy machine. This experience boosts Davey's confidence.

About 17 years later, Davey reappears in the episode #551: “Stars in Our Eyes”. As a successful television producer, Davey explains how his experiences at Whit's End helped shaped his character and inspired him to start his own studio in California. Davey expresses his gratitude by producing a TV commercial for Whit's End.

Davey Holcomb has appeared in 3 episodes, has been voiced by 2 actors, and has received an average user rating of 87.3%.
Retrieved from "https://www.aiowiki.com/w/index.php?title=Davey_Holcomb&oldid=241892"
Categories:
Hidden categories: