From AIOWiki
Jump to navigation Jump to search
Cooper Green 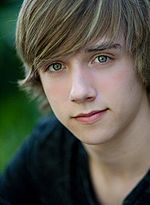 Cooper Green was hired for his first professional acting job at the age of six. He worked a 12-hour day for the director and walked away with a whopping $50 check. The next day the production company called Cooper's agent and said, "We were so impressed with Cooper and we want to pay him an extra $25". Obviously it wasn't the money that enticed him, but Cooper was hooked, and from that day on he knew he wanted to be an actor. Cooper has an impressive resume which includes a variety of roles in various fields of the entertainment industry. He was hired for a recurring role in the CBS series, "Yes, Dear" (2000) and guest-starred in the highly acclaimed drama, "Judging Amy" (1999) opposite Tyne Daly. Cooper can be seen in the Disney Channel Short, "3-Minute Game Show" (2007) and he voices the guest starring role of Leland Lopart in the children's television show, "Handy Manny" (2006), also on Disney. Cooper makes a brief appearance on Adventures in Odyssey as Joseph Fredrick Corelli in The Other Side of the Glass.