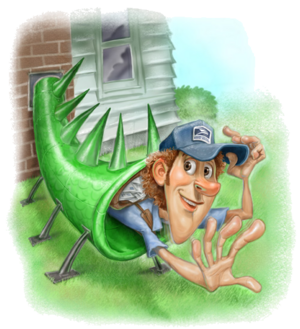 All who enter Wooton's house must do the "Secret Knock," which requires the person wanting to get in to knock five times fast, and then Wooton responds with two knocks back. Wooton has even been known to require the Secret Knock when he is not at his home, as shown in Bassett Hounds. To exit the house, one must go down the exit slide.

Wooton's house is filled with toys that Wooton has collected since adulthood. There are records hanging from the ceiling covered with glitter that spin when the fan is turned on. Wooton lets the kids of Odyssey help him decorate his house.

There are four rooms of Wooton's house revealed in Odyssey. They are his living room, rec room, guest room, and the secret PowerBoy room. Wooton’s house also contains an intercom and has a policy about no Latin at the breakfast table. Guests are even invited to breakfast by a gong that Wooton has set up. In his living room are a trash can chandelier, used-parachute window shades, saddles, the back seat of a car used as a sofa, swings, and a stuffed turtle on wheels. His house also has a doorbell that rings outside and a porch swing that, if swung hard enough, can launch you into the rhododendron bushes.

The secret Power Boy room is behind a sliding bookshelf. To get inside it, a person must take the book The Exhaustive Guide to Turnips off that shelf. Inside the room are many original Power Boy drawings and storyboards because Wooton writes the Power Boy comics in that room. The room also holds the first ever Sloth Man comic book. Grady McKay discovered this room by accident in The Poor Rich Guy. In The Ties that Bind Wooton's cousin Hadley Bassett accidently burnt down Wooton's house by trying to stop an electrical fire with a flammable bathrobe.