From AIOWiki
Jump to navigation Jump to search
Wonderworld Treehouse 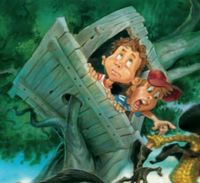 The Wonderworld Treehouse, or more commonly called Wonderworld, is a place where kids could go to use their imaginations. This treehouse was built by Digger Digwillow. He was inspired to build it after using the Imagination Station, and talking with Whit. To Digger, this wasn't a mere treehouse, made of wood and nails. While Digger was the creator the most common user of Wonderworld was Jimmy Barclay.

It later makes an appearance during the Novacom Saga and again during the Rydell Saga.