From AIOWiki
Jump to navigation Jump to search
Jason Earles 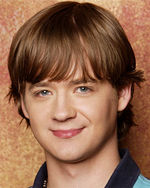 Jason Earles was born in 1977 on April 26th. Jason has acted on Hannah Montana and MADTv. He used a fiction version of his voice for an animated show on Toon Disney Channel and Jetix called Ying Yang Yo! He had also starred in the Disney Channel original movie Dadnapped.He is currently the star of Kick'in It on Disney Channel.