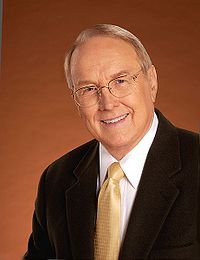 He is an evangelical Christian, with conservative views on theology and Christian-right views on politics.