From AIOWiki
Jump to navigation Jump to search
Allen Hurley 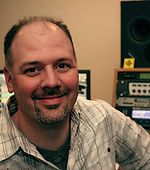 Allen Hurley is a sound designer. Jaykub Allen Hurley was born in Oakland, California. Hurley was raised in the 85th Avenue of the Brookfield District in what is known as Deep East Oakland. Hurley’s father made a living, as a jazz musician while his mother was a secretary before an injury forced her early retirement.

Allen Hurley has engineered 21 episodes with an average rating of 91.5%