From AIOWiki
Jump to navigation Jump to search
Lightning Livingston 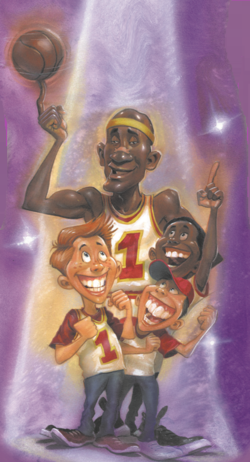 Melvin "Lightning" Livingston was a famous basketball player who retired in Odyssey and opened a sports store.

Livingston first appeared in #48: “Heroes”. He was constantly being asked by Odyssey Times reporter Frank Malone why he retired early. During his time in Odyssey he put on a basketball clinic for kids like Jimmy Barclay, Bruce Wilkins, and Jeff. Jimmy idolized Lightning and was heartbroken when he found out Lightning was involved in drug abuse. Later Lightning apologized to Jimmy for letting him down and reminded him that even those in the Bible weren't perfect. He also appeared in #54: “Peace on Earth”, as one of several people to give to the Barclay family after they'd been robbed. Jimmy mentions him in #219: “Treasures of the Heart”. Livingston is also referenced in a much later episode, #721: “The Holy Hoopster”.