From AIOWiki
Jump to navigation Jump to search
Lester 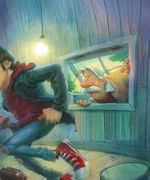 Lester is a mentally challenged man who was good friends with Ernest McAlister before he died. He used to hide in the old McAlister mansion before the Washington family moved in. He also had an imaginary dog named Ralph, he kept the dog for comfort, protection and friendship but the dog had a sad ending when he got hit by a car. Lester also has a fear of needles.

In the episode #546: “No Way Out”, he mentions his mother while showing a picture to Whit. He also tells Whit that the last time he saw his dad, his dad told him that he would come and see Lester again. Ernest McAlister was his only figurative family.