From AIOWiki
Jump to navigation Jump to search
Kyle Massey 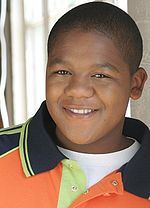 Kyle Massey (born August 28, 1991) is an American actor. He is perhaps best known for starring in the Disney Channel sitcom That's So Raven, in which he played Cory Baxter, and in the Disney show Cory in the House, a spin-off of That's So Raven. Massey is also well known for starring in the Disney Channel Original Movie Life Is Ruff. As a rapper, Massey has released several songs for Walt Disney Records and Hollywood Records including "Underdog Raps". He finished second place in ABC's Dancing with the Stars with his partner Lacey Schwimmer. He was the original voice of Marvin Washington, but was replaced after his one and only appearance.

Click one of the above tabs to see what Kyle Massey has done on Adventures in Odyssey.
Kyle Massey has acted in 1 episode with an average rating of 90%