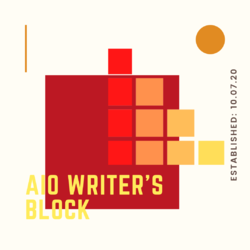 "Home of the SONN, along with reviews and news."

Don created The New AIO Blog in October 2020 and made his first post, "My immediate reaction to 'Was Morrie Right'" in response to the ongoing buzz around the message of The Rydell Revelations, Part 3 and Michael LaFaver's interviews with Phil Lollar. Don liked what he'd done, and he continued with a post named Club vs. Radio, where he compared the AIO Club to listening on the radio. After making subsequent posts, Let's Talk About Characters: Connie was posted and given positive feedback. Don continued to make Let's Talk Abouts and other posts. He created a guest post with John Tuttle III, and John became a frequent guest and writer. A full history of the website was released on the website's anniversary on October 7, 2021.

After a few months, Don changed the blog. He changed the name, added a new logo, and made other small tweaks. On January 1, 2021, he unveiled AIO Writer's Block, where the blog is now.

The blog currently has about 100 posts, including SONN posts, The Jillian Series, and The Novacom Series, a study about the effect of the Novacom arc. The most popular post is "Why 'Jillson' is Literally the Worst Ship Ever", written with John Tuttle III.