From AIOWiki
Jump to navigation Jump to search
Shelbie Bruce 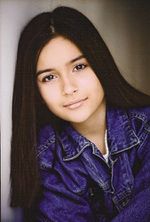 Shelbie Bruce is an actress best known for her appearance in Spanglish. Since then, the majority of her acting-related work has been as minor characters on different TV shows, with her appearing on Ned's Declassified School Survival Guide and Lincoln Heights, among many others. She was raised as a Roman Catholic and says the two most important things in her life are her family and Jesus Christ.