From AIOWiki
Jump to navigation Jump to search
Jim Ward 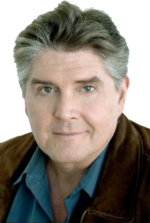 James Kevin "Jim" Ward (born May 19, 1959; New York City, New York) is a voice actor who has contributed to a large number of video games and movies. He co-hosts The Stephanie Miller Show, a nationally-syndicated liberal radio talk show which features a number of his impersonations of political figures and other celebrities and newsmakers. On the show, it was revealed that Jim went to the University of California, Los Angeles, where his father, Don Ward, was a professor of German and folklore. Jim Ward plays Wally Haggler on Adventures in Odyssey, as well as some other minor roles. (Wikipedia)

Click one of the above tabs to see what Jim Ward has done on Adventures in Odyssey.
Jim Ward has acted in 13 episodes with an average rating of 91.8%